Home Blog How dishwasher manufacturers are focusing on saving your marriage… 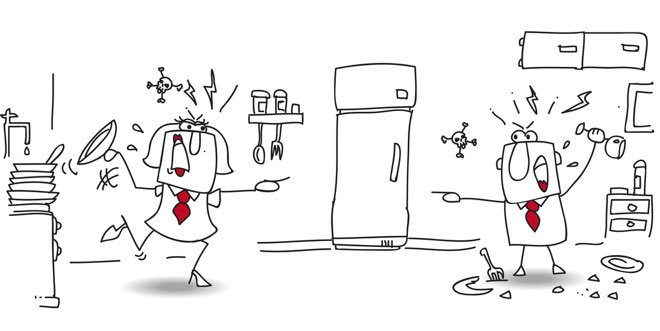 As far as the aims of dishwasher manufacturers go, the chances are that you’d be likely put cleanliness, load times and efficiency levels far before the worthy aim of limiting household arguments. However, it seems that for many a dishwasher manufacturer that this is exactly what is being discussed in laboratories, board rooms and marketing suites, and here we take a look at exactly why.

Household squabbles about how to stack the dishwasher

Research consistently finds that dishwashers are a surprising source of tension within the average household. And, whilst you’d be forgiven for thinking that it would be the topic of ‘who’ should be loading the dishwasher that would be the priority, it’s actually disagreements about ‘how’ it should be stacked that are causing couples to come to blows.

“We’re attempting to put an end to dishwashing dramas by making the process as hassle free as possible.”

Because of this, manufacturers are continually adapting their designs in a bid to be 100% clear about exactly which items go where. And it seems that this may starting to help offset some of the regularly-occurring arguments with as many as 40% of the couples affected by ‘dishwasher rage’ (The Independent 2015).

Going beyond the stacking argument

While disagreements about ‘what goes where’ may serve as the number one dishwasher debate, it seems that the arguments caused by this white good go beyond this one single topic of debate. And as well as this line of research, manufacturers are equally looking at the other areas where they can help create harmonious homes, such as being able to tell easily whether something is dishwasher safe, and the consumables that can create advert-worthy sparkling glasses.

The science behind stacking the perfect dishwasher

We’re not sure about the winners of most household arguments as to which items of crockery should be placed where, but researchers at the University of Birmingham have found that packing in crockery in a circle that surrounds the cutlery basket is by far the most effective. And that’s based on an actual tried, tested and proven mathematical formula! Are you listening manufacturers? A circle. Honestly.